The story of Arezzo - origins and culture of Arezzo 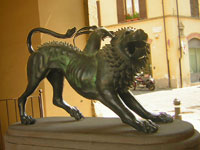 Arezzo was born as pre-Etruscan city, as demonstrated by the findings of stone and the famous "dell'Olmo man", dating from the Paleolithic found near the hamlet dell'Olmo in 1863.
The Etruscan town was built on top of the hill of San Donato, where the current city of Arezzo. Arretium became one of the main Etruscan cities, almost certainly was one of the 12 Lucumone. Are attributed to Etruscan period numerous works of art of considerable value, as the Chimera, held in Florence . In Roman times the city was conquered, and nothing worth merging armies of Arezzo, Volterra and Perugia, who were defeated in Roselle, near Grosseto in 295 BC

In Roman times Arezzo became the central symbol of expansion Roman north, ensuring the primacy as the main bastion of the same defensive, due particularly to its strategic position which required those who want reach the city of Rome to go to Arezzo. E 'so that Arezzo was forced to defend itself from Galli Senoni advancing against Rome, where he died the consul Lucius Metellus, was sent from Rome to Arezzo to the rescue. Of his death remains a path name that indicates the point of near flat all'Arno where he found death the Roman Consul.

During the civil wars of Republican Rome, Arezzo tried several times to regain its independence under the first Mario and then Pompey. These attempts at rebellion Caesar and Silla revenge is transforming Arezzo in a military colony, destroying forever the remaining traces of the previous culture. In early imperial age, Arezzo He slowly his wealth and prosperity were built many public establishments, sprang theaters, baths and a large amphitheater. All this did that feed the fertile cultural life, thanks mainly to the illustrious aretini as Gaius Cilna Mecenate, a symbol of cultural promotion.

After the fall of the Roman Empire, Arezzo suffered a collapse that the port within a short time the size of the city Etruscan period. The depopulation campaign is fast and commercial lines languish for long. The situation remained more or less unchanged even after the arrival of Charlemagne, who devoted himself exclusively to prioritize relations with the diocese, leaving out much of the civilian life. E 'in this period, under the protection of the Bishop of Arezzo, developed many abbeys, which in some way contributed greatly to rebuild and stabilize the trade system and a small part of cultural life, thanks to one of the children most illustrious of Arezzo: Guido Monaco who developed the method of musical notation and invented the tetragramma.

The pivotal point of economic recovery and social Arezzo after the feudal power, is the birth of the free commune, which recently expanded its domination, attacking the powers of noble ecclesiastical authorities: the presence of a console at Arezzo is confirmed since 1098. Towards 1200 urban development and demographic involves construction of a new city walls with a perimeter that reaches 2600 meters, able to enclose an area of approximately 51 hectares.

Two hundred arise in many public buildings at the top of the hill and are terminated the proceedings of the first great basilica of the town of Arezzo: the Church of Santa Maria , A beautiful structure built in the Romanesque style. Following the statement of the new Gothic style began work on the construction of the Cathedral , Who will then return to the inexorable bishop's seat inside the city walls in 1203. The town of Arezzo is now regulated by the city, mostly partisan Ghibelline, which recently managed to extend its dominance conquering a vast territory until the Valdichiana.

Followed bloody clashes against Siena , Florence, Perugia and Citta di Castello until arrival in Italy of Manfredi of Swabia Arezzo who helped defeat the army of Guelph in the battle of Florence Montaperti. Arezzo but remain the only bulwark Ghibelline a certain thickness, which is why after the defeat of members of the imperial Manfredi to Benevento, the papacy financed the Guelph Florence with the help of French mercenaries managed to defeat and conquer Arezzo in the historic battle of Campaldino.